Celebrating more than 54 Years of the Fair Housing Act

This year, we celebrate the 54th anniversary of the Fair Housing Act, the landmark civil rights law signed by President Lyndon B. Johnson on April 11, 1968, that made discrimination in housing transactions unlawful. The Fair Housing Act prohibits discrimination in housing because of race, color, national origin, religion, sex (including gender identity and sexual orientation), disability, and familial status. The Act is intended to provide for fair housing throughout the country.

In commemoration of this historic legislation, HUD has again proclaimed April 2022 as Fair Housing Month. 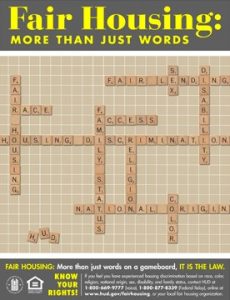 In your own communities, the State CDBG Program encourages local recognition of Fair Housing Month in April. We encourage everyone to take time to focus on fair housing issues and to consider meaningful actions that can be taken to help open the doors of opportunity locally.  And we ask all current CDBG recipients to plan activities to carry out your community’s Fair Housing obligations this month.

A picture is worth a thousand words!  Find lots of professionally designed posters and other printable materials that help promote and educate about Fair Housing on HUD FHEO website (promotional materials webpage), the Fair Housing Resource Center by HUD's often funded partner in Fair Housing outreach, the National Fair Housing Alliance (NFHA), and SC's website dedicated to Fair Housing resources and information,  fairhousingSC.com. And even with the 50th anniversary over, there is still lots of information on HUD's Fair Housing is 50 webpage and the NFHA's Fair Housing Act at 50 campaign site.